An insulator is usually described as a material with completely filled electronic bands that do not contribute to any interesting transport behavior. However, recent theories have shown that in a particular class of band insulators called "topological insulators", the quantum motion of these electronically inert bulk electrons are entangled in non-trivial ways, giving rise to highly unusual conducting states at the surface of the material. This surface metal represents a new state of electronic matter that cannot be realized in conventional electron systems, and could eventually find important technological applications in areas such as spintronics and quantum computation. PCCM seed project researchers have now observed such surface metallic states using angle-resolved photoemission spectroscopy (ARPES), providing evidence for the existence of topological insulators, as well as demonstrating the efficacy of ARPES as a probe of quantum topological orders. 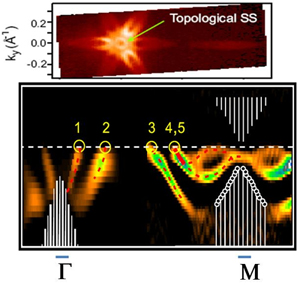 Top: The photoemission intensity at the Fermi level reveals the Fermi surface formed by the surface states, which can be correlated with the positions of the Fermi crossings shown above. Bottom: Surface band dispersion of Bi0.9 Sb0.1- along the to direction showing five Fermi level crossings, which is evidence that Bi0.9 Sb0.1- is a topological insulator. The white lines mark the bulk band structure projected onto the surface.