Magnetocrystalline anisotropy is found in many magnetic materials which means that the energy of a magnet depends on the magnetization direction. This keeps our windshield wipers moving and our toy magnets attached to the fridge. However, on changing the direction of the field that aligns the magnetic moments, the aligned magnetization normally remains nearly unchanged. A strikingly different behavior has been found by researchers at the University of Nebraska MRSEC. The aligned moment of V-doped SnO2 thin films changes by a factor of order two, and the symmetry axis of the moment anisotropy is unrelated to the symmetry axes of crystal and film. Figure 1 illustrates that the V atoms prefer to occupy sites in strongly distorted interstitial octahedra whose symmetry axes are unrelated to the film normal and to the a, b, and c axes of the SnO2rutile structure. The interaction between the anisotropic moments involves the hopping of electrons which, in the presence of a strong electron spin-lattice interaction, amounts to the hopping of current loops (Fig. 2), which goes beyond the normal mechanism leading to ferromagnetism. The moment anisotropy is of orbital origin and expected to exhibit a particularly strong anisotropic electron scattering, which is of interest in spin electronics, and a new technology involving both magnetism and electronics. 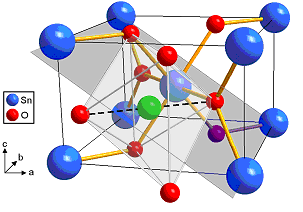 Fig. 1. V atom (green) in the SnO2 rutile structure. The gray area shows the location of the film plane.

Fig. 2. The arrows represent current densities due to interatomic hopping of current loops for (a) parallel and (b) antiparallel moments.