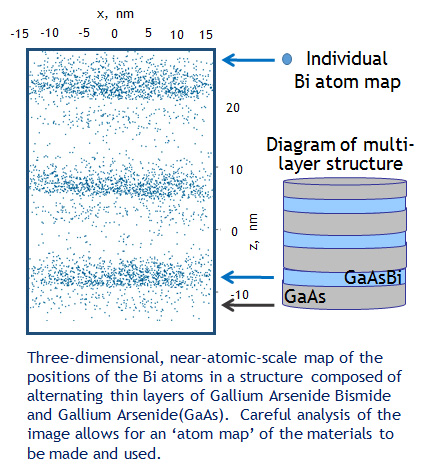 General Overview: Electronic devices inside of our cell
phones and laptops are comprised of many precisely controlled layers formed by
a process called “chemical vapor deposition”. Atoms from a gas react and
deposit on a surface where they organize into a crystal. By utilizing two
atom-level microscopes, a high-resolution scanning transmission electron
microscope and a new three-dimensional atom mapping probe, a group of
researchers at University of Wisconsin-Madison, have demonstrated that it is
possible to ‘see’ whether the atoms are uniformly distributed or form
atom-level clusters.  In particular, they
have “looked” at a new semiconductor, Gallium Arsenide Bismide, that is made
out of elements that do not want to mix. Even though the Bismide in this material does not want to be
part of the crystal, the researchers have used their atom-scale imaging
capabilities to discover conditions whereby this ‘oil and water’-like mixture
can form a homogeneous material.   This
is providing access to an entirely new range of semiconductor materials.