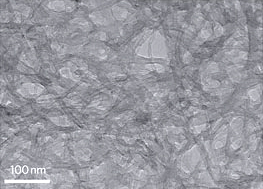 Shao-Horn
and Hammond of the MIT
MRSEC have found that using
carbon nanotubes to fabricate a
lithium battery’s electrodes produced a significant increase in the amount of
power it could deliver, compared to a conventional lithium-ion battery.

To produce the powerful new electrode material, the team used a layer-by-layer
fabrication method, in which a base material is alternately dipped in solutions
containing carbon nanotubes — a form of pure
carbon in which sheets of carbon atoms are rolled up into tiny tubes.
Lithium batteries with the new material demonstrate energy output that is five
times greater than for conventional capacitors, and a total power delivery rate
10 times that of lithium-ion batteries. In addition to their high power output,
the carbon-nanotube electrodes showed
very good stability over time. After 1,000 cycles of charging and discharging a
test battery, there was no detectable change in the material’s
performance.

In its present form,
the material might have applications for small, portable electronic devices,
but if the reported high-power capability were demonstrated in a much thicker
form, it might eventually be suitable for other applications such as hybrid cars.