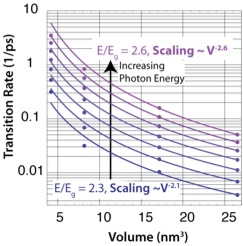 It has been proposed that quantum mechanical effects might be used to enhance the generation of more than one electron-hole pair from a single photon in semiconductor quantum dots. This would result in significant efficiency increases in next generation solar cells.  While this kind of multi-exciton generation has been observed experimentally, there is considerable controversy over the efficiency of the effect in dots relative to bulk material.  Using a semi-empirical approach to study CdSe dots, we have shown that the rate of multiple carrier generation increases as dot size decreases for photons of the same relative energy.