Colloidal
gels are formed by aggregation of particles into a percolating network in
liquid media.  Although colloidal gels
exhibit self-supporting, solid-like properties that underlie the design of a
wide range of materials, how this class of soft solids forms is not yet fully
understood.  In particular, the relative
importance of thermodynamic and dynamic 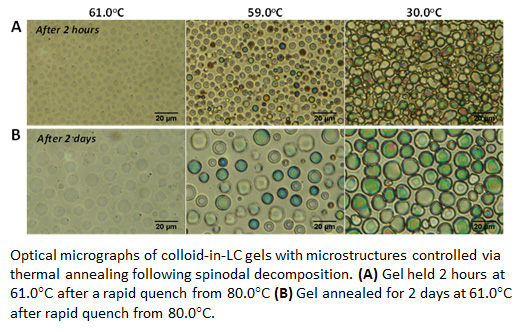 (non-equilibrium) phenomena underlying
the formation of gels is debated.  Over
the past year, IRG3
of the Wisconsin MRSEC
has discovered a new pathway leading to formation of colloidal gels in thermotropic
liquid crystals (LCs).
In contrast to gels formed from isotropic solvents, the mechanical properties
of the gels formed in LCs
reflect the long range orientational
ordering and the associated elasticity of the LC phase. These attributes and
others make this class of materials rich in fundamental phenomena and also
technologically promising. In
particular, whereas two previous methods of synthesis leading to colloid-in-LC
gels have been reported, both involve non-equilibrium pathways.  In contrast, in the pathway discovered by IRG3,
the onset of
formation of the colloidal microstructure is driven by a thermodynamic
instability (spinodal),
and gelation occurs upon nucleation of nematic
LC within the colloidal microstructure formed via spinodal
decomposition. Identification of a thermodynamic pathway leading to formation
of the CLC
gel is significant because it enables rationale design of the microstructure
and responsive properties of this technologically promising class of soft
solids (see Figure).  Ongoing
studies are investigating these materials for use in biological sensors and as
tunable substrates for cell culture.