Controlling Magnetism through a Ferroelectric Switch

Multiferroic materials are of great scientific and technological interest due to their magnetoelectric properties, originating from the coupling between ferroelectric and ferromagnetic order parameters. The interplay between ferroelectricity and magnetism may allow a magnetic control of ferroelectric properties and an electric control of magnetic properties, and could yield conceptually new devices such as transducers converting between magnetic and electric fields and electrically-controlled magnetic data storage. Recently, it became possible to fabricate composite multiferroics by artificially making ferroelectrics and ferromagnets in nanoscale heterostructures. It was demonstrated that the magnetoelectric effect can be significant due to strong elastic interactions between the two ferroic constituents.

Researchers of the MRSEC at the University of Nebraska offer a different route to control the magnetism by electric fields. In the recent article published in Physical Review Letters [Duan et al., PRL 97, 047201 (2006)], they predict that it is possible to change the magnetization at the interface between ferromagnetic and ferroelectric materials by reversing the electric polarization of the ferroelectric. The origin of this phenomenon is the change in the bonding strength at the ferroelectric/ferromagnet interface due ferroelectric displacements altering the interface magnetization when the electric polarization reverses. Using a Fe/BaTiO3 interface as a representative model the researchers show a sizable difference in magnetic moments of Fe and Ti atoms for the two opposite orientations of the electric polarization of BaTiO3. The predicted magnetoelectric effect is much stronger than that in bulk single-phase multiferroics and comparable in magnitude with that observed in elastically-coupled composites. The experimental verification of this prediction will open a new venue for exploration in the search for improved magnetic data storage devices, sensors and transducers using electric field as the controlling mechanism. 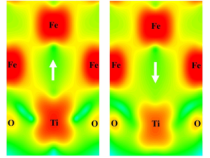 Calculated charge density showing the change in the induced magnetic moment on the interface Ti atom with reversal of the electric polarization of BaTiO3 layer (shown by arrow).