In an ordinary insulator, such as diamond, the occupied electronic states are separated from unoccupied states by a large energy “gap”. The gap prevents current flow when an electric field is applied. Recent research has uncovered a new class of insulators, called topological insulators, in which electrons can bypass the energy gap by moving in surface states. The energy vs. momentum dispersion of these unusual surface states are Dirac-like. They exhibit unusual topological properties which may be important for quantum computing. Previously, a group at Princeton led by Hasan and Cava detected these unusual surface states in the bismuth alloy Bi1-xSbx using angle-resolved photoemission spectroscopy (ARPES). In a new breakthrough, Hasan and Cava have now identified a second Topological Insulator, Bi2Se3. Compared with Bi1-xSbx, the surface states of Bi2Se3 are far easier to investigate. Bi2Se3 has only 1 Dirac state on the surface, which greatly simplifies the analysis of its measured properties. Its dispersion, shown as the red curves SS in the figure (right panel), displays clearly the distinctive champagne-glass profile of Dirac electrons. In addition, the energy gap is much larger, which allows the topological states to be studied even at room temperature. The new material should greatly facilitate research on this new class of materials. 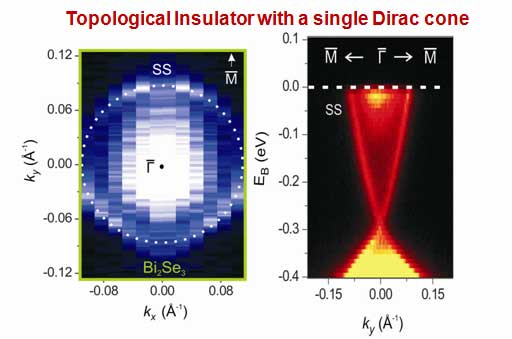 Left: The photoemission intensity at the Fermi level reveals a single circular feature formed by the topological surface state.
Right: The underlying surface band dispersion of Bi2Se3 reveals a Dirac cone as well as a single Fermi level crossing confirming that it is a strong topological insulator