Background: CoFeB-MgO magnetic tunnel junctions (MTJs) are leading spintronic devices that relies on quantum Mechanical tunneling of electrons from one magnetic metal (CoFeB) to another across an insulating barrier of MgO. The electrical resistance of such MTJs is dictated by the orientation of the two CoFeB metals, parallel or antiparallel.   The performance of MTJ is measured by tunneling magnetoresistance (TMR), which is only 20% initially, but greatly increases to 200% after high temperature annealing (Fig. 1). We reveal the evolution of the local structure during annealing.

This work:  Working with researchers at Brookhaven National Lab, we used extended x-ray absorption fine structure (EXAFS) at special energies (K-edge of Co and Fe) to study subtle structural change within the MTJ after annealing from 20 sec to 36 min.  EXAFS, a special x-ray spectroscopy using intense synchrotron radiation, measures the local atomic arrangements of Co and Fe atoms with the so-called first shell Debye-Waller factor α2, which reveals how tightly bound the atoms are within the materials.  We found, as shown in Fig. 2, that as annealing commences the value of α2 dramatically decreases with a concomitant increase of the change of the resistance (TMR). 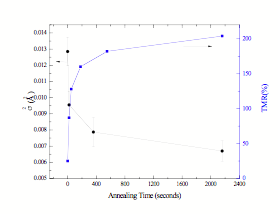