We recently described the first example of a photoactive polymersome,
which was formed by incorporating a protein in the aqueous interior and
a meso-to-meso ethyne-bridged bis[(porphinato)zinc] (PZn2)
chromophore in the membrane.1 We initially investigated the
encapsulation of horse spleen ferritin (HSF) or iron-free apoferritin
(HSAF) inside a polyethylene oxide-polybutadiene (PEO30-PBD46,
denoted OB29) diblock copolymer vesicle. Ferritins are large
iron-storage proteins (MW ≈ 440 kDa) with twenty-four 4-helix bundle
subunits that form a 12-nm sphere with an 8-nm inner cavity. Ferritin
sequesters up to 4500 iron atoms as a hydrous ferric oxide mineral core
and can serve as a magnetic resonance imaging contrast agent. We
observed that ferritin incorporation drives the preferred polymersome
morphology away from simple spheres towards asymmetric morphologies.
Although some polymersomes remain spherical, increases in ferritin
concentration lead to an increased frequency of polymersomes in
non-spherical structures. The simultaneous incorporation of PZn2
into the vesicle hydrophobic membrane imparts sensitivity to focused
light of near-UV to near-IR wavelengths. Confocal laser scanning
microscopy (CLSM) imaging of polymersomes loaded with both ferritin and
PZn2 at excitation wavelengths (488, 543, or 633 nm) where PZn2
absorbs strongly caused many of the vesicles to undergo irreversible
morphological changes ranging from formation of new bends or ‘arms’ and
budding of smaller vesicles to total polymersome destruction (Figure
1). Similar results were seen during imaging by widefield fluorescence
microscopy using a mercury arc lamp. Observations of budding from CLSM
suggest that the shape changes are caused by localized heating due to
sample absorption of focused light within the membrane. 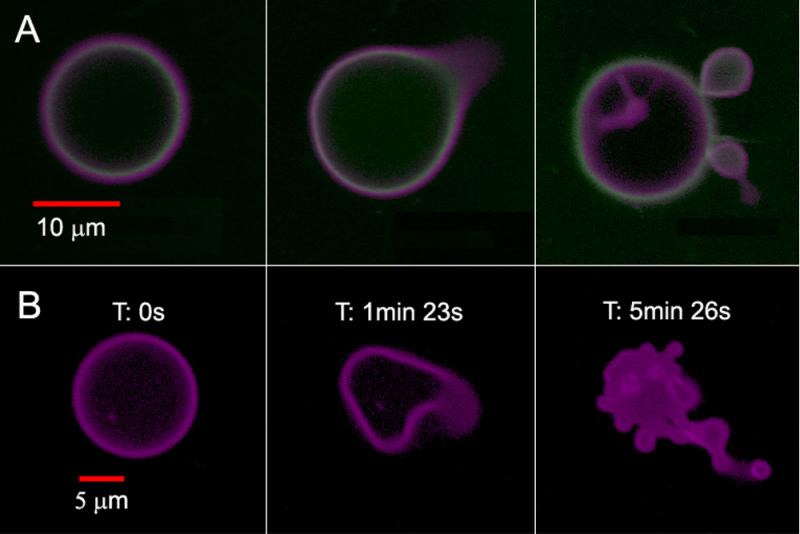