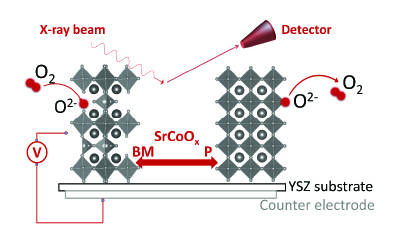 Functional oxides with perovskite
structure (ABO3) are
an attractive group of materials for energy and information applications. They
are the key enabler for several important technologies, including solid oxide
fuel cells, thermal-chemical fuel production as well as novel memory devices
such as red-ox based memristive
systems. Importantly,
their
physical and
chemical properties
can be tuned by controlling the oxygen content in them, conventionally done by
varying the environment temperature and pressure.

MIT MRSEC researchers have
demonstrated that an externally applied electrochemical bias can tremendously
alter the oxygen content, structure and properties of a perovskite, SrCoOx
(SCO).
SrCoOx can be flipped reversibly between
two related phases by the bias applied – the perovskite SrCoO3-δ and
a more open-structured brownmillerite
SrCoO2.5. The electrical conductivity,
oxide ion conductivity, magnetism and
thermal conductivity of these two phases are distinct, and now feasibly
controllable via an external bias.

These results
pave
the way to the use of electrical bias to control
the oxygen content and to obtain fast and easily-accessible
switching between different phases and distinct
properties
of
functional oxides
important for energy and information technologies.

B. Yildiz and H. Tuller