Ferroelectric tunnel junctions exploit an ultrathin ferroelectric layer, 100,000 times thinner than a sheet of paper, so that electrons can "tunnel" through it. This layer resides between two metal electrodes that can reverse the direction of its polarization by applying electric voltage to it. A junction polarity determines its resistance to tunneling current, with one direction allowing current to flow and the other strongly reducing it, known as “on” and “off” states. This feature makes ferroelectric tunnel junctions promising for the next generation of high-speed, high-capacity random access memories.

Researchers at the Nebraska MRSEC in collaboration with their colleagues from University of Wisconsin-Madison have employed graphene, a carbon material only one atom thick, to enhance the performance of ferroelectric tunnel junctions. By transferring graphene in different solvents on the surface of the ultrathin ferroelectric BaTiO3 film, the researchers found that an interfacial ammonia layer leads to strong polarization retention and increases the resistance disparity between these "on" and "off" states by almost three orders of magnitude.

Using graphene as an electrode in FTJs reveals a new potential for graphene as a functional material. The easiness with which graphene can be transferred from a solution to a ferroelectric surface opens a possibility of using a wide variety of molecular substances for interface engineering to the further improvement of ferroelectric tunnel junctions.

This work was published in the December-2014 issue of Nature Communications. 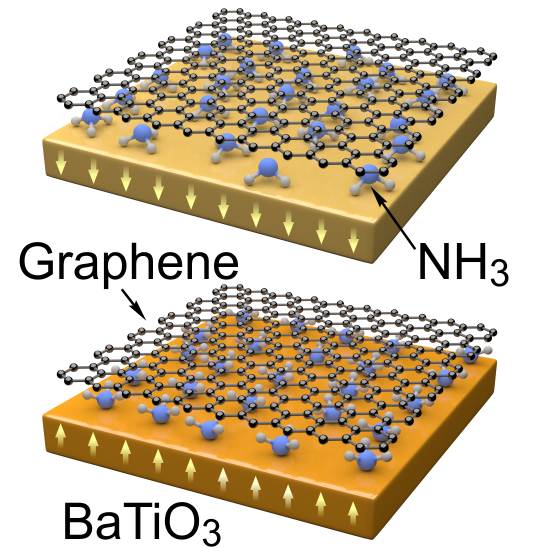 Figure illustrating a re-orientation of the ammonia molecules in the interfacial layer upon polarization reversal in barium titanate. This behavior of molecules ensures a strong retention of polarization and, thus, resistive states of the BaTiO3-based ferroelectric tunnel junction.