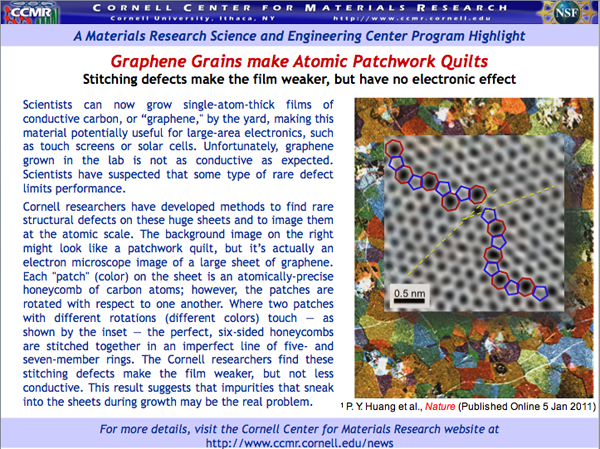 Stitching defects make the film weaker, but have no electronic effect

Scientists can now grow single-atom-thick films of conductive carbon, or “graphene," by the yard, making this material potentially useful for large-area electronics, such as touch screens or solar cells. Unfortunately, graphene grown in the lab is not as conductive as expected. Scientists have suspected that some type of rare defect limits performance.

Cornell researchers have developed methods to find rare structural defects on these huge sheets and to image them at the atomic scale. The background image on the right might look like a patchwork quilt, but it’s actually an electron microscope image of a large sheet of graphene. Each "patch" (color) on the sheet is an atomically-precise honeycomb of carbon atoms; however, the patches are rotated with respect to one another. Where two patches with different rotations (different colors) touch — as shown by the inset — the perfect, six-sided honeycombs are stitched together in an imperfect line of five- and seven-member rings. The Cornell researchers find these stitching defects make the film weaker, but not less conductive. This result suggests that impurities that sneak into the sheets during growth may be the real problem.