How the weak becomes strong: spider silk reveals a paradox of super-strength 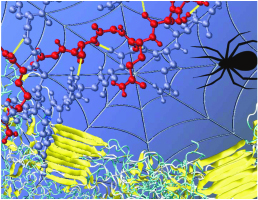 Since its development in China thousands of years ago, silk from
silkworms, spiders and other insects has been used for high-end, luxury
fabrics as well as for parachutes and medical sutures. Now, MRSEC
supported researchers are untangling some of its most closely guarded
secrets, and explaining why silk is so strong, a question that has
remained unresolved. Buehler and co-workers of the MIT MRSEC IRG-II have
found that the key to silk's pound-for-pound toughness, which exceeds
that of steel, is its beta-sheet crystals, the nano-sized cross-linking
domains that hold the material together. Using computer models to
simulate exactly how the components of beta sheet crystals move and
interact with each other, they found that an unusual arrangement of
hydrogen bonds -- the “glue” that stabilizes the beta-sheet
crystals--play an important role in defining the strength of silk.

Buehler and his team are now looking at the possibility of
synthesizing materials that have a similar structure to silk, but using
molecules that have inherently greater strength, such as carbon
nanotubes.