A collaboration between researchers funded by the DOE and NSF-supported
MRSEC and CHM at UC Berkeley and UMASS Amherst has led to a
breakthrough in the areal density of templates derived from block
copolymers (BCPs) having orientational registry over macroscopic
distances. The facets on a reconstructed single crystal surface, like
sapphire, were used to guide and direct the self-assembly of BCPs
having 3 nm cylindrical domains over arbitrarily large surfaces.
Grazing incidence x-ray scattering (GISAXS) quantitatively demonstrated
the perfection in the orientational order and the quasi-crystalline
long-range lateral order of the 10.5 Tbit/in.2 arrays. The
unprecedented small size of the domains will revolutionize bit
patterned storage media, while the ordering achieved over macroscopic
distance opens avenues to the fabrication of directed self-assembly of
BCPs for addressable media. 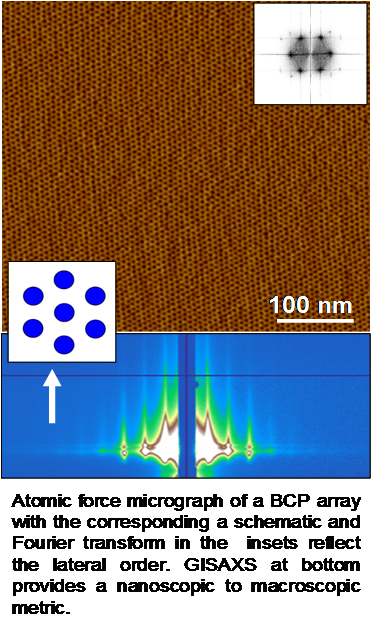