Ordered double perovskites, such as Sr2FeMoO6, are among the very
few materials that allow electrons of one spin direction to move through them
as though they were passing through a normal metal, while blocking electrons of
the opposite spin.  Materials that behave this way at room temperature are
even more exotic. 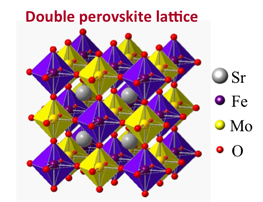 To unlock the potential of Sr2FeMoO6 it is essential to deposit films where the iron (Fe) and molybdenum (Mo) ions are highly ordered and the formation of
unwanted phases is suppressed. CEM researchers have been able to deposit highly
ordered, single crystalline films of Sr2FeMoO6 that
retain their magnetism to temperatures over 227°C.

Films were grown by sputtering in an ultrapure Ar atmosphere.  X-ray
diffraction measurements show that films are epitaxial and phase pure.
X-ray diffraction measurements of films grown on 111 SrTiO3
substrates allow us to estimate that 93% of the Fe & Mo atoms reside on the
correct sites, confirming the high degree of order suggested by the TEM
images.  Films deposited using a novel growth geometry have exciting
magnetic properties: