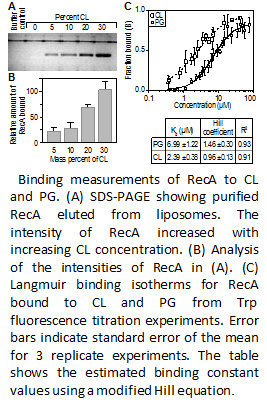 Researchers in IRG3 of the Wisconsin MRSEC are studying bacteria to
understand principles by which nature designs materials to achieve
dynamic spatial targeting of molecules. Recently, the researchers have
discovered that the spatial organization of phospholipids at the curved
regions of bacterial cytoplasmic membranes has an important
physiological role in bacteria, including the regulation and positioning
of the universal enzyme RecA. RecA is a widely conserved cytoplasmic
protein that performs a range of functions in Escherichia coli,
including: DNA repair, homologous recombination, and induction of the
SOS pathway. The IRG tested the hypothesis that the localization and
function of the large, polar fraction of RecA in E. coli depends on its
interaction with anionic phospholipids that accumulate at the large,
negatively curved region of the cytoplasmic membrane. Figure 1 shows
that RecA binds to the anionic phospholipids phosphatidylglycerol (PG)
and cardiolipin (CL) with an apparent Kd of 7.0 and 2.4 uM,
respectively. In addition it was determined that CL negatively regulated
the strand exchange activity of RecA by inhibiting its ability to
hydrolyze ATP in vitro. Intriguingly, the inhibition of ATP hydrolysis
by RecA was dependent on its C-terminal auto-regulatory domain.
CL-deficient strains of E. coli displayed elevated rates of accumulating
spontaneous mutations compared to wild-type E. coli, which is
consistent with the unregulated activation of RecA. These studies
provide the IRG with insight into how membrane strain is connected to
the organization of phospholipids and the biological function of the
resulting material. The extension of these concepts to designing
functional strained LC materials is underway.