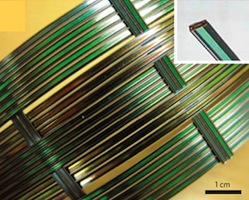 Following up on their recent creation of light-sensitive fibers,
Professors Yoel Fink and Joannopoulos and their research teams have
developed fibers that can detect ("hear") and produce sound ("sing").

These multimaterial fibers are made from a fluorine-based plastic
that is commonly used in microphones. By manipulating the arrangement of
the fluorine and hydrogen atoms, the researchers were able to keep the
molecules asymmetrical and thus make the plastic "piezoelectric,"
meaning that the molecules change shape when an electric field it
applied. In order to generate the electric field, the research team used
a conducting plastic containing graphite.

Possible applications of these fibers could include wearable
microphones and sensors that monitor bodily functions; loose nets that
monitor the flow of water in the ocean; and large-area sonar imaging
systems.

This work was supported by MIT's Institute for Soldier
Nanotechnologies, the Center for Materials Science and Engineering
through the NSF/MRSEC grant, and the U.S. Defense Department's Defense
Advanced Research Projects Agency.