Nebraska MRSEC Partnership with Universities of Strasbourg and Bordeaux

Molecules with switchable magnetic moment could become of considerable importance for the emerging field of organic spintronics, where the control of spin degrees of freedom may be performed electrically on the molecular scale.  Spin crossover complexes based on magnetic iron (Fe) ions are interesting in this regard because they exhibit a reversible transition between a high-spin and low-spin magnetic state, which can be induced by external stimuli such as temperature, pressure, electric field, and by light. The switching of the spin state is strongly dependent of the local environment of the Fe ion, which is susceptible to crystal packing or the presence of an extraneous matrix, and also to long-range effects such as cooperativity between adjacent molecules.

Nebraska MRSEC researchers are involved in a long-standing partnership with French scientists from Universities of Strasbourg and Bordeaux. Recently they have shown that the self-assembly and the structural conformation of the spin crossover molecules Fe((H2B)pz2)2(bipy) and Fe(phen)2(NCS)2 (see figure) are influenced by a supporting gold substrate, with dramatic consequences for spin state and spin state transitions. This demonstration of how the spin state of spin crossover molecules can be manipulated through interface interactions, but also through molecular dipole fields, is new and exciting. Eleven MRSEC papers have resulted from this international collaboration in the last 5 years. 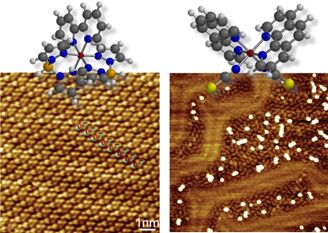