“Writing
Without Ink” is an outreach demo that was created by students working in Dr.
Stephen Craig’s lab. They created a thin film of silicon rubber that can be
“written” on with a stylus or by shining a blue laser light on it. The color
change can then be “erased” by shining a white light over the colored area for
several minutes. This demo provides a visual example of some the self-healing
materials being developed in Craig’s lab at Duke University.

“The
most rewarding part for me was seeing the students’ eyes light up when they
realized that they were performing chemistry with their own hands and that
science could be fun,”
said RT-MRSEC Graduate Fellow Emilee Renk.

“Even
better,
some called their friends over to see the demo, because they liked it so much.
When their friends asked what was happening, the students excitedly explained
the chemistry before Cameron and I had a chance. It was encouraging to watch
the kids make the connection between the color change and the chemistry
happening.”

Sherwood
Githens
Middle School is located in south Durham, NC, and the student population is 47%
African American, 26% Hispanic, 17% White, and 5% Asian. 69% of the students
qualify for free or reduced lunch.

Over
130 people attended the event. 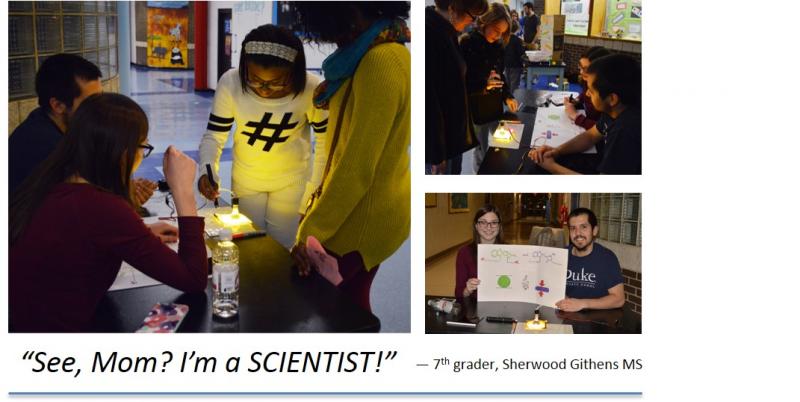