Colloidal particles are often celebrated as atomic- or molecular-mimetic building blocks: programmable bits of matter that can self-organize into microstructured materials and devices.

In this context, the current state of the art is represented by self-assembling DNA-coated colloids. Pioneered by Mirkin (Nature 382, 607-609) DNA-coated colloids use genetic material to control how individual particles stick to one another into precise lattices. Today, this methodology is the gold standard for colloidal self- assembly; from nanoparticles (e.g. Gang et al. Nature 451, 549–552) to elaborate patchy colloids (e.g. Pine et al. Nature 491, 51-55).

The research funded by this grant has enabled  to develop a conceptually new approach to colloidal self-assembly that borrows no material from biology and entirely relies on the innate charge that any colloidal particle develops in water. 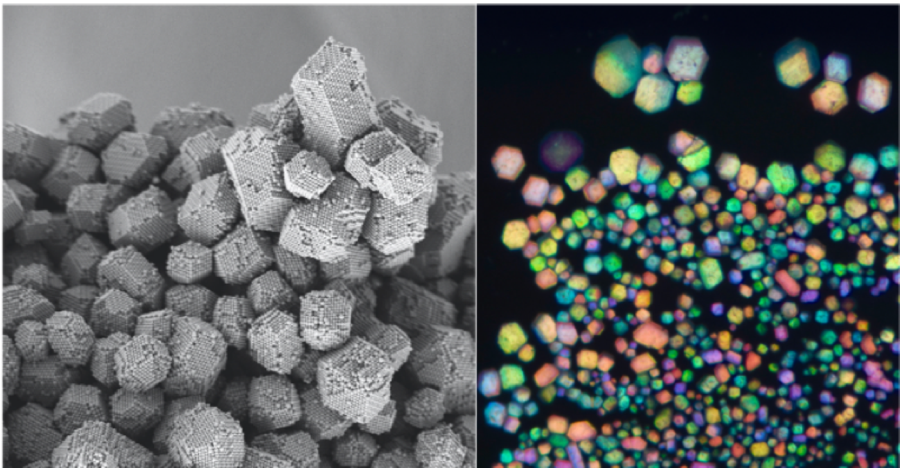 Let’s consider the object  shown in image A. At a first glance, the red-and-green magnified insert might resemble a colloidal crystal similar to those assembled from DNA-coated particles. A second look, however, reveals three important differences: (1) the crystal in the picture is macroscopic, a truly three- dimensional ‘gemstone’ visible to the naked eye, (2) it is a remarkably perfect single crystal, showing facets, and an habit that closely resembles that of an isostructural atomic crystal, and (3) it contains no DNA. Much like rock salt forming from oppositely charged ions, this colloidal crystal assembles from mixtures of plain colloidal particles through a process that we refer to as polymer- attenuated Coulombic self-assembly (PACS).

Until now, the only experimental realization of an ionic colloidal crystal required specifically engineered particles and specific mixture of organic solvents to minimize van der Waals forces (van Blaaderen et al. Nature 437, 235–240). This research demonstrate that virtually any particle can serve as a model colloidal ion and assemble in water into bulk ionic crystals.  The mechanisms we discover opens an unprecedented window into the field of colloidal self-assembly and microfabrication.