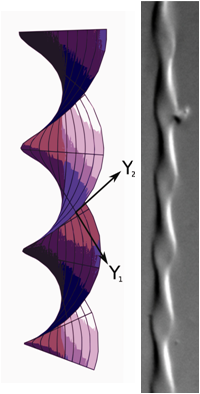 Rodlike fd viruses in an aqueous
solution, along with polymers that produce an attractive force between the
virus particles, have been observed in laboratory experiments to self-assemble
into a variety of geometric structures including twisted ribbons (see the schematic
illustration and microscope picture to the right). We have developed a
theoretical model which explains the properties of these ribbons on the basis
of very general features of the fd rods. The theory yields
predictions in good agreement with experiment, namely, (a) a phase diagram with a first-order transition
from flat membranes to twisted ribbons, (b) the ratio of the ribbon's
pitch to width, (c) the tilt angle of the rods at the edge of the
ribbon.  The theory has also demonstrated
the importance of molecular chirality ("twisting-handedness") in the formation of
the ribbons, as well as the tendency of fd rods to assemble into
structures with negative Gaussian curvature (as in a saddle shape).

We have studied a
theoretical model for the chiral smectic A twisted ribbons
observed in assemblies of fd
viruses condensed by depletion forces. The depletion interaction is modeled by
an edge energy assumed to be proportional to the depletant polymer concentration in solution. Our model is based
on the Helfrich energy for surface
bending and the de Gennes model of chiral smectic A liquid crystals
with twist penetration at the edge.  We
have considered two variants of this model, one with the conventional Helfrich Gaussian curvature
term, and a second with saddle-splay energy. A mean field analysis of both
models yields a first-order phase transition between ribbons and semi-infinite
flat membranes as the edge energy is varied. The phase transition line and tilt
angle profile are found to be nearly identical for the two models; the pitch of
the ribbon, however, does show some differences. Our model yields good
qualitative agreement with experimental observations, namely, (1) the existence
of a first-order phase transition between ribbons and semi-infinite membranes,
preempting a transition to finite-sized disks; (2) the dependence of the tilt
angle at the edge of the ribbon on the curvature of the edge; (3) the decrease
in the tilt angle at the edge of the membrane as the system undergoes the
first-order transition from the semi-infinite membrane to the ribbon; (4) the
order of magnitude of the pitch to width of the ribbon.