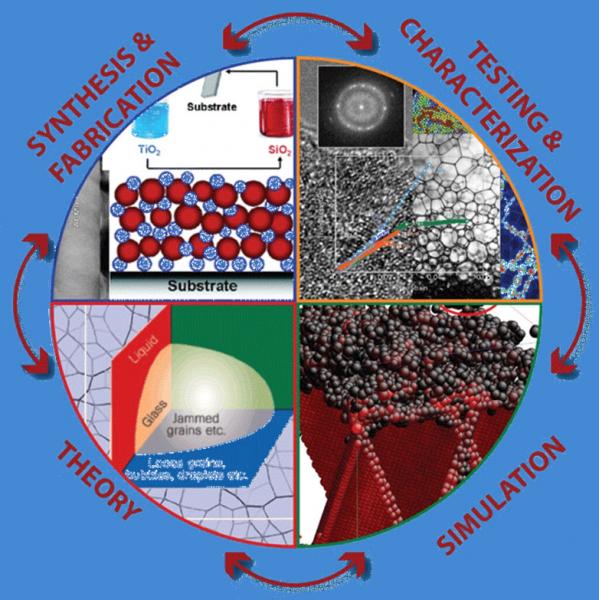 IRG-3 studies disordered packings of atoms, nanoparticles, colloids and grains with a goal to to understand how localized rearrangements organize under extreme load to form shear bands, and thereby to develop ways of predicting whether systems are about to fail, and to make new, tough materials by designing their vibrational properties. In condensed matter systems, disordered packings are pervasive. Yet our fundamental understanding of the mechanical response of disordered packings lags far behind that for crystalline ones. In particular, the mechanisms controlling mechanical instabilities that lead to failure are not understood. This scientific gap impedes applications of materials such as bulk metallic glasses, amorphous thin films, and nanoparticle assemblies. To gain new insights into the failure process, the onset of mechanical instabilities and failure will be studied in disordered systems across a range of constituent particle sizes, from packings of atoms to packings of macroscopic grains. This comparative approach brings together researchers from fields that are currently disparate. IRG-3 leverages this collective expertise to study shear band formation and the onset of mechanical failure at each scale: (1) atoms in carbon-based films and metallic glasses; (2) nanoparticles in layer-by-layer (LbL) assemblies; (3) colloidal glasses; and (4) granular media. The atomic and nanoparticle systems are chosen because their mechanical properties are important in applications. The colloidal and granular systems are chosen both for their materials importance and as model systems that are straightforward to visualize and that offer fine control over particle interaction and particle shape and size distributions. The IRG's long range goal will be to use this knowledge to develop and test new design rules for fabricating novel materials with otherwise unattainable mechanical stability.