Microreactors for Abiotic Ligation of nanoRNA 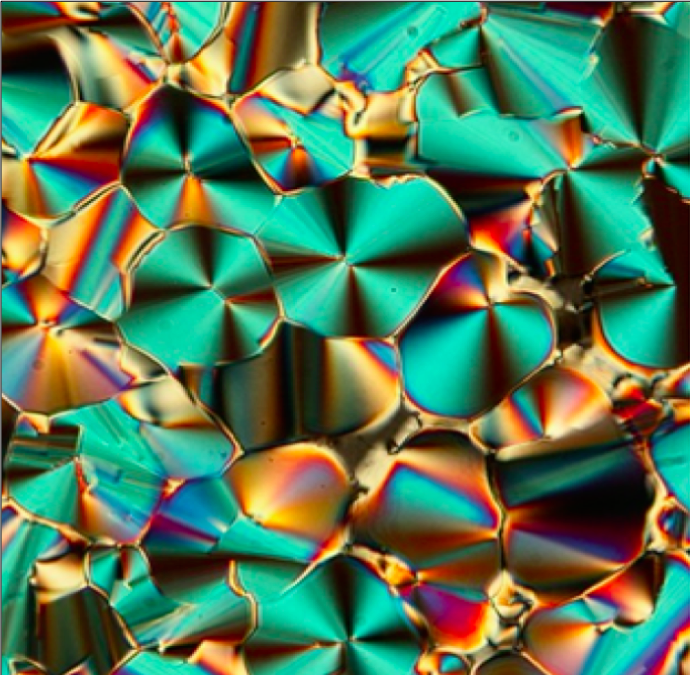 The scientific understanding of evolution is extensive, but limited by some notable, if not embarrassing, gaps.  Among the great challenges of basic science is to understand the origin of life, and, in particular, the origin of the double helix structure of stacked base pairs of DNA and RNA, life’s most remarkable molecular creation. Center research moves us a step in this direction, showing how the polymerization required for DNA and RNA to hold genetic information can be strongly promoted by coaxing bases to stack up and adopt liquid crystal ordering, evidenced by the colored domains in the photo.

RNA molecules hold and transmit information in living things by selectively sticking to one another, depending on their internal sequence of bonding groups (complementary or not). An idea for how such sequence-directed assembly appeared on Earth is that such molecules were first made in liquid crystal (LC) domains like those visible in the image. Here short RNA molecules form a LC phase that shows up colorfully when viewed between crossed polarizers. The LC order also holds the short DNAs together to make it easy for ligation agents in solution to chemically link them together, making longer complementary chains. Thus the LC droplets are chemical microreactors in which the basic mechanism for biological information storage emerges.

This highlight and associated research was supported by NSF through the University of Colorado Materials Research Science and Engineering Center, DMR 1420736.