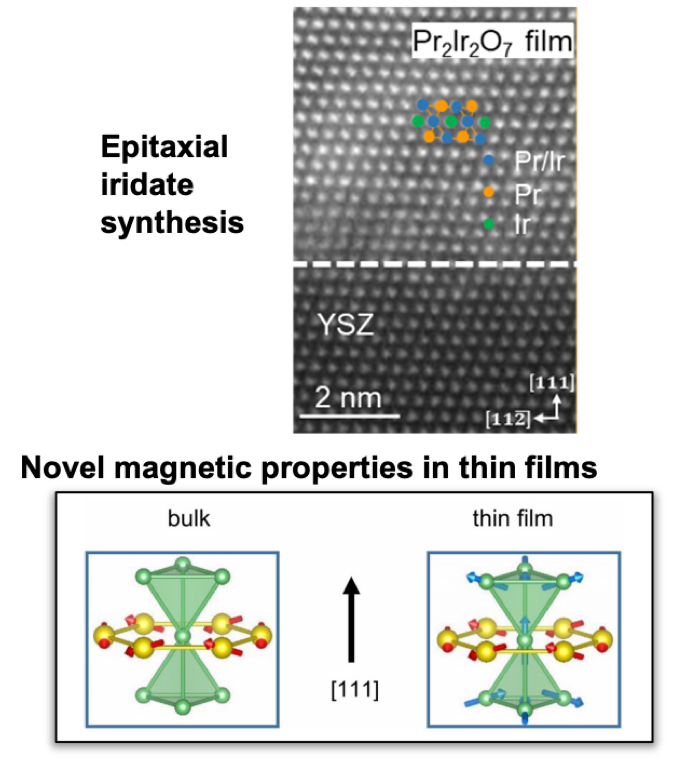 The magnetism of materials arises from magnetic moments associated with particular atoms. A magnetic moment is a bit like a tiny bar magnet. If all the moments point in the same direction, the material behaves like a permanent magnet, but there are many other possible arrangements with different behaviors.

The Wisconsin MRSEC has created thin films of a fascinating magnetic material, Pr2Ir2O7, in which the magnetic moments are frustrated: No matter how they are arranged, some of the moments are always fighting to change their direction, like two bar magnets with their north poles shoved together. Frustration creates a rich landscape for discovery and manipulation of new magnetic effects and of electronic phenomena linked to magnetism.

The Pr2Ir2O7 was synthesized by solid-phase epitaxy, a process in which a structurally disordered, amorphous layer is transformed into an ordered crystal. This synthesis method avoids evaporation of iridium during crystal growth, which limits synthesis by conventional methods. A key feature of the thinness of the films is that they are stretched during growth, which provide further control of their magnetic properties.